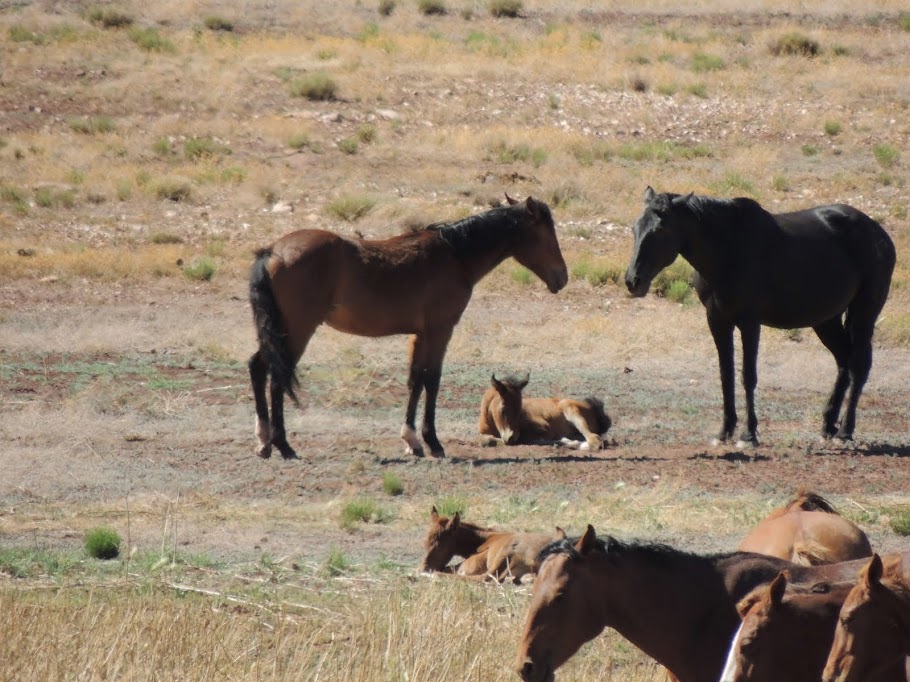 
Leslie Balcerak wrote this wonderful book, and it was illustrated by Rosemary Orbegoso.  I was fortunate to receive a copy of this wonderful book a few months ago.  I'm a very sentimental person, and with the first sentence, I sort of got choked up.  You see, I've been "mom" to greyhounds for a lot of years now, and there is very little that I read about them that doesn't get me feeling teary eyed.

I used to tell the children's story at church, and a book like this would have been a wonderful story to tell those kids.  This book was written for children, but as an adult, I believe that any adult would find this book informative and entertaining. In this book, the trainer and the greyhound, Aggie, seemed to speak each others' language!  What dog mom or dad hasn't wanted the language barrier to be non-existent!

When the trainer talked to the dog about needing to be retired, I cried!  I felt so sad that she had aged until she could not be the very best anymore.  I always want dreams to go on and on.

When Bohemian Agile ( the greyhound in this book) is retired, and stays at the track kennel for a month getting more and more depressed, I felt like crying.  When she got adopted, she was so confused at first, not knowing what was ahead of her. I shed a tear, because I cared about her confusion. But having adopted  greyhounds many times, I knew she would adapt and would love having a real home.  She would love her new family and of course they would love her!

Thank you Aggie for writing this wonderful book!
Posted by Hazel at 1:15 PM 13 comments:

My sofa is 6 feet long, and there is plenty of room for two greyhounds, but they don't always agree with me.
There are days that they threaten (mildly) each other to let them have the whole sofa to themselves.  They like to scrunch the sleeping bag out of the way and get onto the sofa upholstery!  Of course they don't have to try to get the white and black dog fur off the upholstery.

But this particular evening, they decided that they were happy to share, and so there was no growling, lip curling, or jaw snapping!

Doggy detente was evident!
Posted by Hazel at 3:42 PM 11 comments:

Each Thursday afternoon, in La Paz Valley, a Western concert is held in this large metal building. It lasts two hours, and they have an intermission half way through, with refreshments!

The musicians are very good and they sing and play numerous instruments.  I believe that they are as talented as the musicians seen on television.

The audience are senior citizens , as are the musicians.  The songs are mostly the older songs which the audience can relate to, and are wonderfully traditional.
Posted by Hazel at 4:50 PM 5 comments:

The two greyhounds couldn't be more different.  When Fleur goes outside she always wants to get her "business " taken care of quickly, then it's time to play!  She stands outside the door and calls for Power to come outside and play with her!


Power wants to be allowed to continue his nap, even though it's been about eight hours since he went outside for a potty break!  He completely ignores Fleur calling him, and/or me calling for him to wake up and come outside!

The last few weeks, Power has again been pulling the "wake Mom up every 10 minutes"  business at night!

When he did something similar in New Mexico, I finally decided he must have been cold ( temps were in the 20's every night), so I bought the flannel jammies for the dogs.  It seemed to do the trick.

After getting to Quartzsite, he was fine at night for a few weeks, but then started in doing the same thing.  He would wait till I turned off my reading light, and in the very nanosecond that my brain would release and go to sleep, Mr Power would "yip" and it of course would wake me.  I thought he wanted outside, so we would go through the routine of me letting him outside into the fenced yard, where he would pee, drink a gallon or two from the pool, jump on the motorhome step( his signal that he is wanting back inside).  I would open the door and he would stand in the open doorway looking at me and just STANDING letting the heat out and the cold or rain in, and making it difficult to keep the cat inside.  After a minute or so, I would walk out onto the steps, and ask him to go inside.  Since he is afraid of the door ( it gouged him in the hip last year) he is reluctant to trust that the door won't get him again.


So he has the habit of standing in the doorway for a LO-O-O-O-NG time, and if the door moves even slightly, will back out of the opening, and stay in the yard, refusing to come near the door.  To me this understandable and I give him jackpot treats for coming inside!
Sometimes I stand by the door and make sure that the door can't swing shut and get to Power.  Getting him inside is sometimes easy and sometimes very hard!

I decided maybe he needed a night light, and I decided to leave an LED light on at night!  That worked (seemingly) for a few weeks into months, and with the jammies, and the light I was getting my sleep again!  Yipee-e-e-e!

About two or three weeks ago, Power started to do him "waking mom up" routine again!  He had his jammies on, he had a warm place to sleep, he had a night light!   I told him to be quiet and go to sleep he would comply for about 1 1/2 minutes!, then start all over again.  If I got out of bed , went to the living room to sleep in my laz-e-boy recliner he would go right back to sleep and never make a peep the rest of the night!

I began to suspect that he was trying to train me to stay near him!  I did not want him to be successful in that instance, if it was so!

One night a few nights ago, I decided to let him bark and cry till he got tired of it and quit.  I was listening for almost thirty minutes, and he never quit for one second!  This was very hard on my nerves, and I'm sure my neighbors were hearing it!  I finally got out of bed, went to the living room, and stood there looking at Power (such an innocent face)

I was beginning to get desperate, and wanted to find a solution before he became so indoctrinated in his mind that keeping me awake was a permanent problem.

So, in desperation, I decided to hook a leash to his collar and tied the other
end to the leg of the sofa.  He immediately laid down on his bed and went to sleep!  He stayed quiet the rest of the night!  So the next night I repeated the leash trick and again he slept the night through!

What in the world is this about?!

I have been relearning crocheting and knitting this year, and I decided to use this lovely ball of multicolored ribbon to make a hat!  The hat turned out to be very small, and unusable by any adult.


I hope that you can tell that Fleur is on the sofa, as is Power.  The hat got Fleur's attention away from Power.  She is not overly happy to share the sofa!
Power was not so happy to wear the hat either!

In my second campsite, I was getting birds to come to my birdseed and water bowl, but it mostly was birds like house finches, white crowned sparrows, and doves.   No quail were coming to the area.  I was less than 100 yards from their home trees, but they would not venture out that far into the open.

So, a couple days ago, I again moved to another campsite.  This site is back down near the wash and the palo verde trees that the quail live in and under!

I was very surprised to see the dingbats moving my fence, swimming pool, and other outside stuff!  What a nice bunch!


So today, I was pleased to see a crissal thrasher, coming near the feeder, and saw a few quail coming out of the wash and thinking of coming over to my water and seed.  I didn't get a photo, so maybe another day!
Posted by Hazel at 3:43 PM 9 comments:

There is a business called "RV Proctologist".  I made use of their services recently. 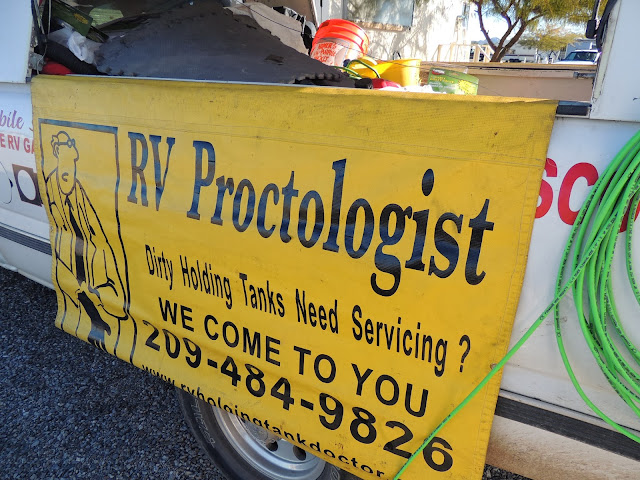 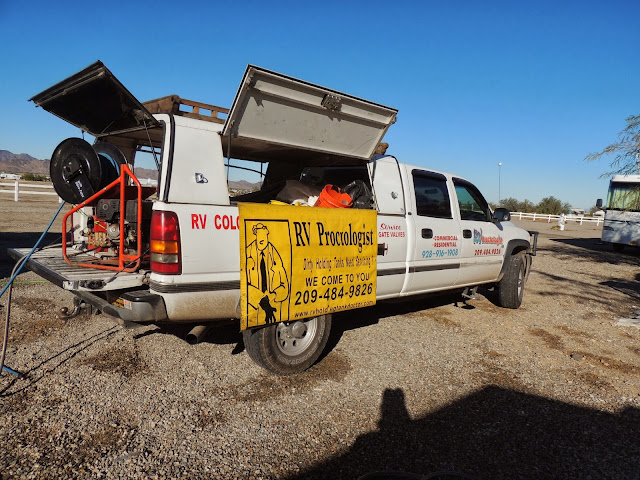